After Henry Ford failed again in the automotive business and sold its second manufacturing plant to Henry Leland, the latter formed the Cadillac Motor Company, and the Runabout was among its first vehicles.

Even though it wasn't the first, it was the first that could carry up to four people. The light, open-top Runabout was shown at the 1903 New York Auto Show, and all three cars displayed by Leland were sold instantly. In just a few days, the young carmaker received orders for another 2,286 vehicles with a 10$ deposit. Leland offered the Runabout in three. The base model featured two seats and a long, sloped plank at the back, a four-seat version, and an option for a tonneau cover. The latter two were also known as Cadillac Tonneau.

Cadillac was far from the luxurious brand it became later, but it did have an edge. It was carefully crafted in wood, metal, and brass. Its oxyacetylene headlamps were placed on the upper side of the front, steep panel. Its artillery wheels (wood-spoke wheels with rubber bands) offered some comfort. The two-seat version featured a long, sloped-down rear end that covered the engine and transmission from its sides.

Bot versions featured a passenger area with leather-clad seats. The front bench was accessible via two side cuts, without doors. As an option, the carmaker offered another bench seat in the back with two additional entries. That option cost 100$ over the 750$ base price for the two-seat version. Customers also had to pay for the removable rag-top.

The engine was developed by Henry Leland and featured one faced-forward cylinder. It developed ten hp (7kW) and sent its power to the rear wheels via a chain drive and a two-speed manual gearbox. 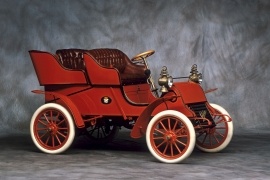