This luxobrage was the epitome of a personal luxury vehicle back at the beginning of the '70s and one of the first cars in the world that featured a driver's airbag.

While the muscle-car era was coming to an end, Cadillac prepared the road for luxurious models designed for those who were not that much attracted by quarter-mile times or cornering speeds. Thus, the ninth generation of the Eldorado appeared in 1971 and showed a size increase. It was longer than most four-door sedans on the market. In its open-top shape, it also replaced the former de Ville rag top.

Right from the start, Cadillac tried to create an impressive vehicle fit for those with deep pockets and a taste for luxury. It adopted a new design, with squared lines and flat panels. Moreover, due to its front-wheel drive architecture, it had to have a longer front overhang. At the front, the sculptural vertical grille was a new design element, which stood in place for decades to come. It also boasted a wide V-shaped front fascia, resembling a ship's bow.

With its lavish cabin fit for at least five occupants, the Eldorado boasted full vinyl seats and plenty of legroom for all occupants, thanks to its 126.3" (3,208 mm) wheelbase. In terms of safety, apart from the optional airbag, it also featured a system that told the driver about the lightbulbs status. Thus, they didn't have to go around the car and see if all the lamps were in running order.

Under the hood, Cadillac installed a huge, 500 cu-in engine (8.2-liter), which was later replaced by a smaller 425 cu-in powerplant. The only available transmission was a three-speed automatic. For enhanced comfort, the Eldorado sported coil-springs in the back. 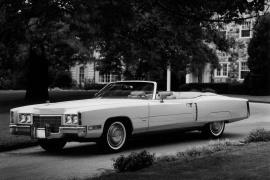 2 The Cadillac Blackwing V8 Was an Unappreciated National Treasure, Here's Why

4 Crusty 1977 Cadillac Eldorado V8 Clinging to Life, Can You Save It?