The new G-platform was stiffer than the previous K used for the 1994 model. The wheelbase was extended with 3 cm (1.2”), but the 4.6-liter Northstar engine and the 4-speed automatic transmission were kept.

The biggest changes were on the look. Either we are talking about the exterior or the inside of the vehicle, the 2000 DeVille is a new vehicle, not a facelifted one. The exterior had a fresh appearance, underlining Cadillac's intention to attract younger buyers. Also, for that segment, a new trim level was introduced, named DTS (DeVille Touring Sedan). It had 17” wheels and a modern interior. For the regular Cadillac buyers, there was the DHS (DeVille High-Luxury Sedan) and the basic DeVille. An important improvement in the automotive industry introduced by the 2000 Cadillac was the introduction of LED taillights, which was a world's first.

The 4.6-liter V8 engine was offered in two power outputs, 275 hp and 300 hp, respectively. But it was strange that Cadillac couldn't offer a better automatic gearbox and only a 4-speed transmission was available. 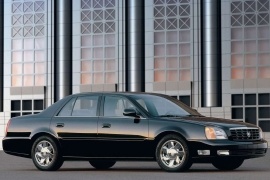