The seventh generation of the DeVille was a mix of performance and luxury sedan for the North-American market.

It was still addressed to middle-aged and older customers.

Cadillac built a car long enough to offer enough legroom in the back, but with a front-wheel-drive to be easier to drive. To have a better impact on the market, it offered it only with two versions of its Northstar V8 engine, mated to a 4-speed automatic transmission.

The DeVille look was associated with the mobster's family with its long and wide hood and with the wide D-pillars in the back. The trunk looked like it could have room for at least two people side-by-side. The angular look with chromed grille and flat headlights offered an imposing presence on the road. The cast-aluminum wheels were standard for the Concours trim level.

Inside, the DeVille could accommodate up to six people on the front and rear benches. A front two-seat option was available. In the rear, the child-safety lock was standard so nobody could open the door from inside if that was engaged. Also, for safety reasons, the DeVille featured standard dual airbags, all-speed traction control, and ABS. The air-conditioning and stereo-cassette player were also standard fit, while the CD-player was an option.

Under the huge hood, the car-maker installed a choice of two V8 engines mated to a 4-speed electronically-controlled automatic transmission. It was a front-wheel drive and that eased out the driving. With its soft and comfortable suspension, the DeVille was like a flying carpet on the road. 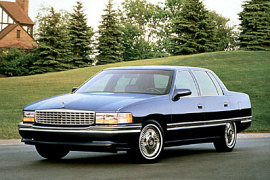