The 2020 names for the Cadillac made a lot of people braking their tongues and brains figuring out what's about the new names and numbers.

The look of the CT5-V was slightly different than that of a CT5. For starters, the -V version had angrier LED headlights and air-scoops design inspired by performance vehicles. Like any other V series, the grille was completely black, with a black mesh and the big, Cadillac badge in the middle. Its entire presence was sporty. A set of Brembo brakes was fitted to the front of the car, and the red calipers could have been seen through the 19” light-alloy wheel fitted as standard.

Inside the CT5-V there was a big infotainment unit mounted on top of the center console. It supported Android Auto and Apple CarPlay. The bucket-seats upfront provided good lateral support. The CT5-V was designed and built to compete against the European premium vehicles such as the BMW 3-Series, the Audi A4, and the Mercedes-Benz C-Class. Some interior details were special. For instance, there was a special pocket for a mobile phone. It was installed in the center storage space, but poking out near the center armrest. It had a split line on one side that allowed a charging cable to be attached to the phone.

For the platform, the CT5-V received new amenities from the latest Chevrolet Corvette. The Magnetic ride control 4.0 version from the supercar was installed in the CT5-V. 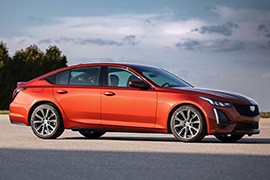 1 Drive Like a Mobster in Tony Soprano's Cadillac Escalade ESV

5 The Cadillac Blackwing V8 Was an Unappreciated National Treasure, Here's Why