Based on a brand new model called the CT4, the 2020 Cadillac CT4-V is essentially a mildly sportier version of the former but without going all-out like the V-Series versions of before.

Instead of going against established rivals like the Audi S4 or the Mercedes-AMG C 43, Cadillac decided to go a step down with the performance, for reasons that are yet to be fully known.

Just like the new CT5 in V guise, the CT4-V is based on the rear-wheel-drive Alpha architecture, and can be had in either RWD and AWD. Unlike its predecessor, the ATS-V, which was powered by a twin-turbocharged V6 with over 460 horsepower, the newly introduced CT4-V has to make do with a "high-output 2.7L Turbo" four-cylinder engine that delivers 325 horsepower. The engine is mated to a 10-speed automatic gearbox and the CT4-V is not offered with a manual gearbox option, however, it has paddle shifters. The good thing is that both AWD and RWD version come as standard with a limited-slip differential.

The CT4 is built at the Lansing Grand River plant and went on sale in 2020. It has a starting price of $33,990 and compared to its rivals at that time, the Audi AA and the MB C-Class, the entry-level luxury sedan is cheaper - one of the major differences between the CT4 and its rivals. 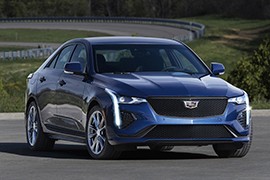