GM decided that it needed a facelifted version for the Buick's Regal lineup, and that came in 2012, four years after the model's introduction.

When the American giant developed the GM Epsilon II platform, it made it for four continents. Apart from Europe, where it sold the car under Opel and Vauxhall badges, it offered it in Australia as a Holden and in China as Buick Regal.

With a refreshed front fascia that resembled the European Opel/Vauxhall Insignia OPC/VXR, respectively, the Regal adopted its waterfall grille that supported the brand's logo in the middle. The tall and narrow air intakes on the sides were just carried over from its European siblings. Moreover, even the door panels featured the same sculptured areas, even though they could've made new ones. But they looked nice and, after all, why bother? At the back, apart from the logo, it was clearly a European (or Australian) vehicle, sporting the same taillights and, apart from Insignia, a horizontal chromed slat.

Inside, the Regal featured a similar dashboard to the European siblings, with four dials in the instrument cluster. On the left, a turning knob used for the headlights confirmed the German-inspired design. Moreover, the sloped center stack featured an infotainment display placed on top, with a dial that controlled it mounted between the gear-selector and the center armrest.

Under the hood, Buick installed a 2.0-liter inline-four mated to a six-speed automatic gearbox provided by Aisin. It sent its power to the front wheels and, starting with the 2014 model-year, with an option for all-wheel drive. 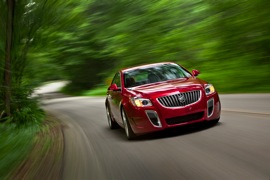