It was the first production vehicle that featured over 1000 hp on the market and its price-tag was through the roof.

But it was the fastest car on the planet and it established the benchmark for most of the hyper-cars: the Bugatti Veyron 2005 was, and still is, a beast on the road.

After Audi (Volkswagen Group) bought the Bugatti brand, its goal was to make the most astonishing supercar on the market. And so it did, when the Veyron appeared. Its massive bodywork, enormous power and strange quad-turbo on a W16 engine were a marvel of engineering. The short front and integrated greenhouse and engine compartment look were true special features for any vehicle.

The interior featured the best materials and finishes on the market. The only rival in this chapter was Rolls-Royce. The seats were both comfortable and supportive, with adjustable bolsters on the side. On the big, central console covered in aluminum, there are two air-vents, one dial and few buttons for the HVAC and one dial plus few buttons for the audio system. No fancy TFT or touch-screen there. The instrument cluster had only dials.

But the main feature of the car was the 1001 hp engine that was mated to a 7-speed dual-clutch gearbox developed especially by the F1 gearboxes manufacturer Ricardo, in the UK. 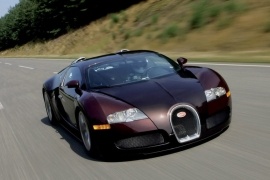