The Bugatti Type 57 SC Atlantic was one of the most iconic Bugatti cars ever made.

It was one of the most exclusive and expensive cars ever made. Only four were built and only three still exist.

While Europe fog of war started to rise from Hitler's Germany, in France Ettore Bugatti gave the green light for producing the Type 57 SC. The design was based on Ettore's son, Jean Bugatti's concept-car Aerolithe. There were two versions for the 57 SC: the Atlantic and the Atalante. The Atlantic Coupe is considered “The Holy Graal” of the Bugatti cars. Only four of these were manufactured between 1936 and 1938. The automotive world has been searching for the fourth Atlantic ever since. Jean Bugatti died in 1939, at the age of 30, in a car crash when he tried to avoid a drunken cyclist, but his legacy lived on with the Type 57 SC Atlantic. The “S” letter came from “surbaisse” (lowered) and the “C” came from the Compresseour (Supercharger).

The design was like a teardrop with a long nose and a sloped rear. Under the curved, flat, end, there was the spare-wheel compartment. The car featured a fin across the roof and back, down to the six stainless steel exhausts. The magnesium fine-wire wheels were kept in place by a single log nut. The bodywork was built entirely from a light, but flammable, magnesium alloy named Elektron.

Inside, there were two seats and a shelf behind them, for luggage. The four-spoke, big, steering wheel resembled the Bugatti race-cars. A long gear-lever came from underneath the dashboard, angled toward the driver.

Under the hood, there was a 3.3-liter supercharged engine with 8 inline cylinders. It featured double overhead camshafts and a total output of 200 hp. When combined with a total weight of just 950 kg (2090 lbs), the result was mindblowing for those times. 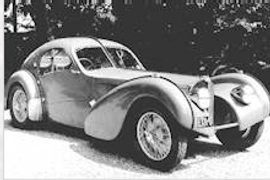