Gerry was the first to start building a sports vehicle for each of them, in 1986. Bufori kept the tradition and made only hand-built vehicles. The name of “Bufori” was actually an acronym coming from Beautiful, Unique, Funtastic, Original, Romantic and Irresistible.

Later on, when the company evolved and moved its production facility in Kuala Lumpur, it raised its capacity to around 300 vehicles per year, with a team of 108 engineers.

The 1992 Bufori V6i is a 2+2-seat convertible inspired by 1930s American roadsters. It is powered by a front mounted 3.8-liter V6 engine that transmits power to the rear axle via a 5-speed manual transmission (or an optional automatic BTR gearbox). Unlike its old American relatives, the Bufori V6i benefits from 4-wheel independent suspension, ventilated brake discs for the front axle and anti-roll bars.

The interior was designed with “simple and functional” idea in mind. It has 2 fully adjustable bucket seats, a walnut dashboard, classic brass instrumentation, a high power AM/FM stereo cassette radio and an air conditioning unit. The V6 engine produces 170 bhp and 293 Nm (217 lb-ft) of torque, giving the small roadster a 0-100 kph (0-62 mph) acceleration time of 6.2 seconds and a top speed of 240 kph (149 mph). 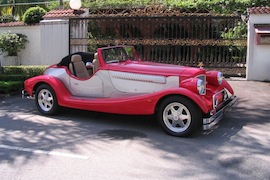