The acronym for these words is Bufori. A brand that was born in 1986 and obtained a Malaysian passport, coming from Australia.

In 1986, three brothers decided to build their own cars. They took a VW Beetle platform, stripped it down, and then placed a roadster bodywork on it. A roadster that they designed and manufactured in their own garage. That is how the Bufori brand started in Australia, built by Khouri Brothers, Anothony, George, and Gerry. Two years later, they took their passion seriously and launched the Bufori Mk1 roadster.

The design was inspired by the 1930s American roadsters design. It is hard to say which model was their inspiration since there were few of them. The big grille in the front, rounded headlights, and the front fenders could have been found on many other cars. The split-windshield came also from a time when the curved glass was just a dream. But the radiator grille was fake, since the engine was an air-cooled one, and it was placed in the back.

Since the car was custom made, the interior could have been designed as the customer wished. Leather seats, the wood grain on the instrument panel, and a CD-radio were all that the car could offer. The trunk was in the front and the engine could have been heard rattling behind.

The engine was a VW air-cooled one brought from Brazil, where the Beetle was still produced. The Bufori brothers offered the MK1 model with either a four-speed manual or a 3-speed automatic. 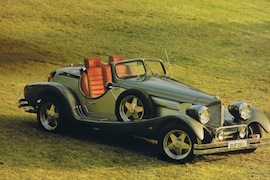