You might think that Bristol Cars started with vehicle manufacturing, but that’s completely wrong.

The now car producer had been founded back in 1910 when it started its aircraft and aero engines production. The year 1920 brought the name of Bristol Aeroplane Company.
For aviation passionates, during WWI and WWII, the company produced fighter aircrafts, including the so called Brisfit (Bristol Fighter). The Bristol Blenheim and the Bristol Beaufighter were both introduced to the Royal Air Foce.
The vehicles production started 36 years later, in 1946. Some of the older models include the Type 400 saloon, 401, 402 and 403. The 402 was a coupe, while the 401 and 403 had 5 seats. The company had a collaboration with Chrysler, thus some of its models had a V8 Chrysler engine.
The Bristol cars were present on the racing track as well, competing for 3 consecutive years at the Le Mans in the 50s.
If Bristol disappeared for a while, in 1999 they released the Fighter Project.
Bristol introduced the high-performance Fighter T in 2006, with the first deliveries of this model starting September 2007. It was introduced as an extra version of the already existent Fighter and Fighter S (high-performance models by definition) and was fitted with an incredible 8-liter twin-turbocharged V10 unit delivering a massive 1012 hp and 1036 lb-ft of torque. The new car also featured a redesigned chassis structure (stiffer suspension and sportier dampers), revamped intake grille, new side exhaust pipes and rear wake diffuser. Most of the car's interior components were built out of lightweight materials (steering wheel, seats, center console and switch gear) aiming to improve on-road performances. Timing sheets showed an impressive 3.5-second score on the 0-60 mph sprint and an alleged top speed of more than 270 mph (electronically limited to 225 mph). 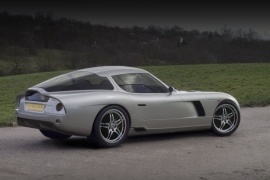