The 2002 Fighter was supposed to fight against the bankruptcy that endangered the old and proud of the Bristol brand. In the end, the brand didn't survive, but its legacy did.

Despite its huge V10 engine that was usually find into Dodge Viper, the Bristol Fighter was a British car. Its bodywork was created by the former Brabham Formula One engineer Max Boxstrom and its drag coefficient was as low as 0,27.

The sleek body didn't offer some aluminum or carbon-fiber elements. It was a form that followed function, without elements to stand out from the crowd. At first glance, it was just another sport-car without big performance. But the Bristol Fighter was like a factory-built sleeper that could put a lot of cars to shame. The abrupt end looked just like if someone cut a fighter airplane right after its cockpit. Those airplanes had upward-opening canopies. This Fighter had doors that opened upwards, in a gull-wing style. In the rear, two, big, round exhausts were punching out through the rear bumper.

Inside, there was a simple, yet elegant, combination of leather and expensive materials. Even the steering wheel was different than those from other cars from its era, with two spokes with dents on it to keep hands on it. The instrument cluster was airplane-inspired with big, round, dials, mounted on a flat aluminum panel.

The big V10 engine was installed behind the front axle. It could be mated to a 6-speed manual gearbox or a 4-speed automatic. In its top-spec version, the Bristol Fighter T had over 1000 hp. 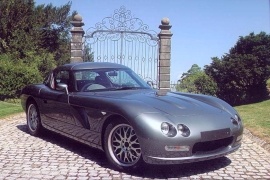