Bristol cars were not about creating new vehicles and charging the market with outstanding models but creating exclusive vehicles for those who appreciated British cars.

While it wasn't very keen on introducing new models, the British manufacturer still had to comply with new rules and regulations, forcing it to upgrade its vehicles to sell them. Thus, in 1994, Bristol dismissed the former Britannia model produced between 1982 and 1994 with the Blenheim. The new model took its nameplate from a former famous British bomber built during WWII.

The vehicle's overall shape was not much different than of its predecessor or even its grandfather, the Bristol 603, which was introduced in 1976. It featured the same long hood with a spare wheel hidden behind the front left fender. In addition, the Blenheim sported a front fascia with four round headlights that resembled those installed in the Ford Capri. Bristol designed the vehicle using the same three-box shape from the 603 but refined it with new, flush door handles. At the back, the corner-mounted taillights flanked the trunk's lid.

Inside, the car manufacturer counted on high-quality materials utilized for the seats, dashboard, and door panels. It used fine leather and gloss-finish wood trims for most of the panels. The British bombers inspired the dashboard's design, with a logical layout in front of the driver. But then, the design team needed to find a way to install the new audio equipment and place it atop the dashboard. So even though it didn't look delicious, it was a logical decision.

Under the hood, Bristol finally made its step into the fuel-injected era. It provided the Blenheim with a Chrysler 5.9-liter V8 paired with a four-speed automatic gearbox. 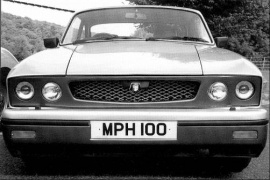