The Bristol 407 was the first of its breed to sports a Chrysler V-8 engine under the hood, which gave the light coupe the power it deserved.

In 1960, the former racing driver Tony Crook took the helm of Bristol Cars Ltd. He took the 406 model, installed a bigger engine under its hood, and resulted in the 1961 407 model.

The 407 resembled the 406 model design and didn't give a clue about its performance. Its front fascia featured a distinct engine compartment with an oddly-shaped grille, which sported a trim that resembled an airplane viewed from the front. Bristol's designers installed the headlights on the upper side of the front fenders and the parking lights underneath them. A fat, chromed-metallic bumper with two vertical reinforcements completed the car's front. Its three-box sedan shape with two doors was very advanced for those times. It featured flush fenders and body panels without flamboyant curves or trims. It was a keep-it-simple design that worked. At the back, the round taillights mounted at the end of the quarter panels formed a wide V-shape above the chromed bumper.

Inside, the carmaker kept its traditional, helm-inspired, two-spoke steering wheel. Moreover, Bristol installed an aviation-inspired instrument panel with seven dials, where the speedometer and tachometer took the outer sides, grouping the gauges in the center. Unlike most cars of its era, the carmaker installed buttons on the right side of the steering wheel, controlling the automatic transmission. Its walnut veneer on the dashboard matched the luxurious leather seats. The carmaker installed a bench for two at the back, with a folding armrest in the middle.

Under the hood, Bristol mounted a 5.1-liter V-8 supplied by Chrysler and paired it with a three-speed automatic transmission. The carmaker built only 88 407's until 1963 when Bristol replaced it with the 408. 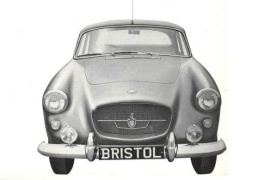