After WWII, the Bristol Aeroplane Co. decided to build cars and they started with a license of a pre-war BMW 327. And that's how the Bristol 400 series started in 1947.

Fast forward in 1958 and the new, Bristol 406 was launched. It featured the same inline-six engine from the pre-war BMW 328 with Solex triple downdraft carburetors and a cross-pushrod system that produced 105 hp.

The chassis was derived from the BMW 327, but with an evolution of a Watt linkage on its live rear axle. The 406 featured a Dunlop 4 wheel disc brakes, which was unusual for that era. The Mercedes-Benz 220 “Ponton” from the same era had four drums. On top of that, was a rack-and-pinion steering.

The styling was debatable. The 406 was the first Bristol that looked like it had been designed by a car-maker instead of an aircraft-maker. The big “mouth” front was far from pretty, but the rest of the car had a modern look.

Inside, the 406 was extremely luxurious, with sumptuous leather seats and high quality bound Wilton carpets. A particular feature for the 406 was the flip-up integrated headrests in the front seats.

The dashboard layout and the instrument cluster looked like they were taken from an aircraft, with easy reading and enough information about the car's parameters.

The body-on-frame structure made the vehicle heavy, especially for those times. And with an engine that was great in the mid-'30s, the performance wasn't that great. The 4-speed manual gearbox with an electric overdrive was new and it could keep the car in low revs at higher speeds. Only 174 units of Bristol 406 were built. 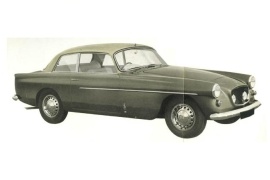