It was the first vehicle built by the German car-maker to be featured in a James Bond movie franchise.

The predecessor of the BMW Z3 was the Z1. There was not any Z2 on the market. The Z3 was based on a mixed platform based on the E36 3-Series model, but with the rear axle taken from the E30 due to its compactness.

Z3 was a typical roadster with a long hood, short cabin, and even shorter rear deck. Its rounded form and wide headlights covered by a clear-lens cover attracted a lot of customers. It was produced until 2003. On the front fenders, there was an exhaust vent with four slats, that resembled the BMW 507 roadster.

Inside, there was a two-seat layout with a big center console between the occupants. The central stack was slightly tilted toward the driver. With the dials and gauges carried-over from the E36 model, the Z3 was fit for sporty driving.

Inside, it offered sport-bucket seats for both occupants. On the center stack, BMW installed a stereo and the controls for the air-conditioning unit. The bucket-seats featured high bolstering to support the occupants while fast cornering.

Even if it featured a mixed platform/drivetrain, the Z3 was a fast and nimble car. It was offered with a choice of engines ranged between 1.8-liter and 2.8-liter before the facelift. In 1999 the car went through a mid-life cycle refresh and received some updated engines. The 2.0-liter inline-six was replaced by a 2.2-liter, and the 2.3-liter was upgraded to a 2.5-liter, while the 2.8-liter was increased to 3.0-liter. The M versions were a different chapter. 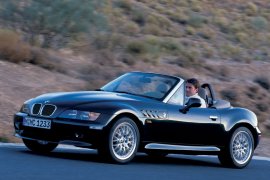