BMW finally decided to enter the 7-seat SUV market with the 2018 X7, a vehicle that was a direct competitor with the Mercedes-Benz GLS and the Audi Q7.

When the BMW launched its first X5 in 1999, it built a factory for that car in the U.S. It was the instant hit of the year. With some technology carried-over from the Land Rover, the X5 sales skyrocketed. Unlike the ML, it featured a unibody bodywork, and that made it lighter. The same goes for the X7, which is, actually, a bigger X5.

The front of the car was the most debatable part of the vehicle. The big grille didn't look like a pair of kidneys anymore. They were just huge with vertical slats that could open and close to help the thermal management of the engine. On the sides, the doors were big enough to allow comfortable access inside.

The cabin was inspired by the 7-Series model, with ample space for every passenger. All of the 7 seats in the car were upholstered in leather. A three-piece glass roof was available, ensuring a light interior and an airy feeling for the passengers. The newly designed display grouping which came as part of the standard-fitted BMW Live Cockpit Professional included a Control Display and a fully-digital instrument cluster of 12.3” each.

For the engine department, the BMW X7 was fitted with two gasoline units and a 3.0-liter diesel offered in two versions, one being fitted with four turbochargers. The standard transmission was an 8-speed automatic. 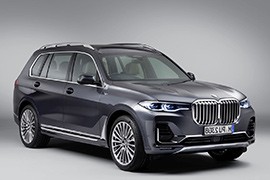 1 BMW M340i xDrive Goes Pedal to the Metal on the Autobahn, Tops Out Sooner Than Expected

3 BMW M Asked Its Fans Where They Would Go With the Concept XM, It Backfired Spectacularly

5 BMW 8 X Jeff Koons Heading to Australia in Q3, Only ONE Copy Will Be Sold There