The German carmaker introduced the second generation of the X5 in 2007, improving the entire vehicle from top to bottom.

The flame-surfacing design concept imagined by Chris Bangle was at its peak when the X5 was introduced in 2007. With its big headlights and flowing lines, the German SUV didn't want to look streamlined, but massive. The bulky grille and the "BMW kidneys" were more significant, and the fenders were wider.

The interior offered room for five adult passengers, with an option for an extra row of seats in the back for another two. The manufacturer installed an instrument cluster with four dials and a small screen for the on-board computer for the driver. As an option, the iDrive infotainment unit was offered in a few versions, the top one offering sat-nav and a premium sound system.

Under the hood, BMW installed a choice of diesel and gasoline engines with 6 and 8 cylinders, providing a power output ranging between 235 hp and 355 hp. All versions were offered with an all-wheel-drive system. 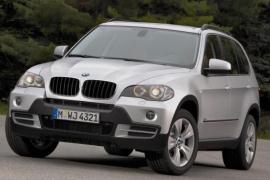