The fourth generation of the BMW X5 was introduced in 2018 and, after 2.2 million units sold from its previous three generations, it reached a high level of maturity.

The BMW X5 was one of the most popular premium SUVs on the market. Its high volume of sales convinced the German car-maker to improve the vehicle up to a level hard to reach by any of its competitors.

The massive grille design of the 2018 BMW X5 was not on everyone's taste. The headlights design was slimmer and in the same aesthetic trend as the rest of the BMW range. They came with LED as standard while BMW Laserlight with Adaptive LED Headlights was available as an option. The car featured standard 18” light-alloy wheels for the base trim level. The rear split tailgate was kept and was offered with standard power opening and closing.

Inside, there was room for five adults and a split rear bench backseat int 40:20:40 scheme. There were plenty of USB ports and 12V plugs in the rear. An option for two 10.2” touch-screen displays was available for the rear-seat entertainment. In the front, the driver had a digital instrument cluster with a TFT instead of analog dials. On the center console, there was the infotainment unit and screen. It could be activated by voice-commands, gestures, steering wheel buttons, and the iDrive rotary knob on the center console.

The engine ranged from a 2.0-liter turbocharged diesel up to a 4.4-liter V8 turbocharged gasoline unit. While the former was not available in the U.S., the latter was not produced for Europe. The standard transmission was an 8-speed automatic gearbox. More performance models were available fitted with either 3.0-liter diesel engines or the M-version. 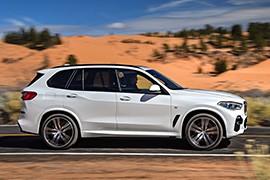