The second Sport Activity Coupe in BMW’s history was unveiled at the Geneva Motor Show 2014 in its production form after being introduced as a concept around a year earlier. The new model featured styling cues that fitted perfectly within the BMW range at the moment, with the headlights connected to the kidney grilles, massive air intakes and a front bumper that subtly concealed the usual ‘X’ all SUV-like Bavarian cars do. On the engine front, all units were EU6 compliant and all of them were available with the automatic 8-speed gearbox, only one being offered with a manual, the entry-level xDrive20d model. For the first time on one of their models, the Germans decided to offer a balanced selection of both diesel and petrol engines, some countries getting only one choice, like the UK where only diesel models were initially put up for sale. Performances were impressive as the near 2-ton car, in its most powerful version, the xDrive35d, could do 62 mph in just 5.2 seconds. The X4 also was fitted with the latest onboard technology from BMW, as part of the ConnectedDrive system. 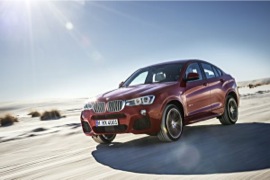