The second generation of the BMW X3 has received a facelift in 2014. As usual for the German brand, the refreshed version brought more grunt under the hood and a revised look.

Back in 2003, BMW launched the first generation of the X3. The brand's officials didn't name the car as an SUV, but as SAV – Sports Activity Vehicle. The idea behind the name was that the car was sportier than other SUVs from its segment. It was an SUV built for the road, but with decent off-road abilities.

The redesigned, 2014 X3 was longer by 1 cm (0.4”) by the new design for the bumpers. The front fascia featured new headlights, which were offered as an option with LED. The foglights were also available with the LED technology as an option. The rearview mirrors were redesigned and incorporated the LED turn-signals.

Inside the vehicle, new materials and new colors were available. The big trunk could take 550 liters (19.4 cu-ft) that could have been extended up to 1600 liters (56.5 cu-ft). The tailgate featured an optional hands-free open/close system by swiping the foot under the bumper.

The X3 was available as rear-wheel-drive or all-wheel-drive. The former was used only for specific engines, while the latter was the most common option and it was standard for most of the engines/transmission configurations. A newly developed 2.0-liter turbodiesel with twin-turbo was available and it offered 190 hp. The standard transmission for most of the models was a 6-speed manual, while an 8-speed automatic was offered as an option or standard for specific engines. 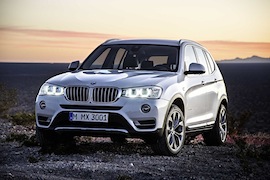