The first compact crossover from a luxury sedan brand, the BMW X3 was revealed for the first time in 2003.

The second generation BMW X3 was released in 2010 at the Paris Auto Show. Larger than its predecessor, the new X3 was similar to the X4 in terms of exterior design.

The main target of the new model was to increase comfort and space. While the first generation had a somewhat cramped interior and offered a rough ride, the then-new X3 improved these aspects.

While the suspension was redesigned to improve the ride quality, the X3 still remained solid, with a very responsive handling.

Even with a taller center of gravity, the X3 still handled like a 3-Series on the track.

Inside, the fit and finish was highly improved, giving an athletic feel.

Two trim levels were available with the second generation: the xDrive 28i and the xDrive 35i.

With the xDrive 35i, the X3 came equipped with 18-inch alloys and adaptive xenon headlights.

Many options bundled into packages were offered, such as the Sporty Activity package that added sport front seats, roof rails and a sport transmission with paddle shifters, the Premium package with a sunroof and leather upholstery, the Dynamic Handling that added adaptive suspension dampers, and three driver selectable drive modes, as well as a Cold Weather package with heated front seats and a heated steering wheel.

Other stand-alone options were also offered, such as bigger 19-inch alloys, a rear-view camera, a head-up display, a power liftgate and a premium sound system. 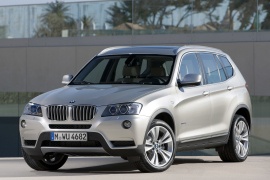