BMW introduced the BMW X3 in 2003 and, in October 2006, it launched the mid-life cycle refresh that changed more parts in and out of the vehicle.

BMW launched the 5-Series based X5 in 1999 and, four years later, the X3. It named its vehicles as Sports Activity Vehicle, or SAV for short, since it considered that those cars will be used mostly on paved roads and only rarely on soft off-road situations. They were absolutely right about that, but most of the X3s and X5s were built with all-wheel-drive.

The 2006 X3 LCI (Life Cycle Impuls) received new headlights that, along with the foglights, formed a “six-eye” look for the car. The front bumper was redesigned with distinctive separation for the upper and lower part. The same principle was applied in the back with the rear bumper. New taillights design was also introduced.

Inside, there was a new, three-spoke, steering-wheel and galvanized metal for the door handles. The improvements in the interior material quality were made also for the upholstery.

Usually, when BMW does an LCI, the biggest improvements are under the hood. For the 2006 X3, the car-maker dropped some engines and improved or completely changed others. For the suspension, the standard model already featured a stiff setting for the dampers, but for those who want to trade comfort for handling, a sport-package was available. 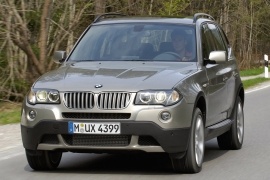