After the successful introduction of the BMW X5 on the market, the German carmaker didn't wait for too much to launch a smaller version and the first generation of the BMW X3 appeared in 2003.

In the fall of 2003, at the Frankfurt Auto Show, BMW unveiled the smaller brother of the X5. It was a car that didn't have too many competitors on the market, except for the Land Rover Freelander, which was developed under the BMW management. With a platform taken from the BMW 3-Series, the X3 had the same rear suspension with the compact sedan.

The design was arguably one of its strongest elements and the car was blamed to look like a station-wagon on stilts. The unusual headlights design was changed on the mid-life cycle refresh in 2007.

Inside, there was room for five adults, with enough headroom and decent legroom for the rear passengers. In the dashboard, there was an option for the iDrive infotainment system, controlled via a rotary knob on the center console. There were more options for the infotainment unit, including a BMW AM/FM/M-CD Radio with eight speakers. A large panoramic sunroof was on the options list.

The traction system was jointly developed with Magna Steyr from Austria, where the SUV was built. All X3 models feature BMW's all-wheel-drive system, with a default 40:60 torque split between the front and rear axles and the ability to direct all torque to either axle. The system used an electronically controlled multiple-plate clutch to enable infinitely adjustable, fully variable distribution of torque from front to rear with the capability of up to 100 percent of engine torque going to either axle. The engine options were of 2.0- and 3.0-liters, with four and six cylinders, respectively. 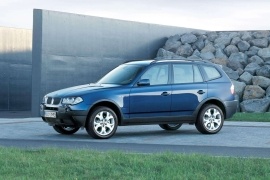