The BMW X3 reached its third generation already. It was the vehicle that started the SAV (Sport Activity Vehicle) lineup in BMW back in 2003. In 2017 evolved in both terms of design and technology. The platform, design, engines, and interior are new. The only part that was kept was the 8-speed automatic gearbox from ZF. But even that had received some software updates.

On the outside, a bigger grille appeared on the front and, in the bumper, there are other three openings for cooling the engines and brakes. In the center, hidden behind the mesh, is the radar for adaptive cruise control and AEBS that helps the driver to avoid crashes. The 2017 X3 is slightly bigger than the previous generation by 56 mm (2.2”), which was added to the wheelbase that now has 2864 mm (112.8”). That is good for the rear seat passengers.

For the driver, BMW installed a new semi-automated driving system that allows the vehicle to keep its lane, follow the car in front at a safe distance and brake if necessary and even take turns. Since the autonomous driving was not regulated, the driver still has to keep a hand on the wheel. At least from time to time when the car asks for.

The base engine is a new, 2.0-liter gasoline unit that offers 181 hp, while the top version is the X3 M Competition that punches 503 hp! Two turbodiesel engines are offered and also a 293 hp plug-in hybrid version. 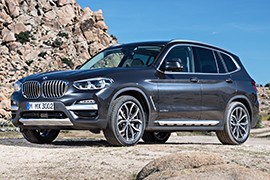