Since the open-top vehicles are usually slower than their coupe siblings, most car enthusiasts prefer the latter for performance.

Yet, the convertibles are somehow more attractive, and thus, there is a serious market for them, especially if they are fitted with high-power engines.

The M8 Competition Convertible received a facelifted version at the beginning of 2022, along with its hard-roof versions, the Coupe, and the Gran Coupe. Yes, it couldn't match them in terms of acceleration times or hard-cornering abilities, but it had more flavor with the top down while cruising on the streets.

Along with the facelifted version, it received minor exterior details. Apart from the color palette, which was enlarged, it kept the same appearance. The same bumper with black inserts and wide center grille in the lower apron dominated the front fascia, while the side scoops kept their hexagonal mesh pattern for the ducts that channeled the air to the front disc brakes. The light-alloy wheels, though, were changed with a standard 20" set and a few options for other designs with the same size. Its M8 predecessor featured a set of 19" as standard with an option for 20" alloys.

The cockpit went through some changes and received a 12.3" touch screen atop the center stack. It replaced the older, 10.25" unit from the 2018 model and also got some upgrades for the infotainment system in terms of performance. The M8 Convertible featured standard sport seats with multiple adjustments, while the carmaker offered an option for Carbon bucket seats for those who still wanted to try the car's muscles on a track. 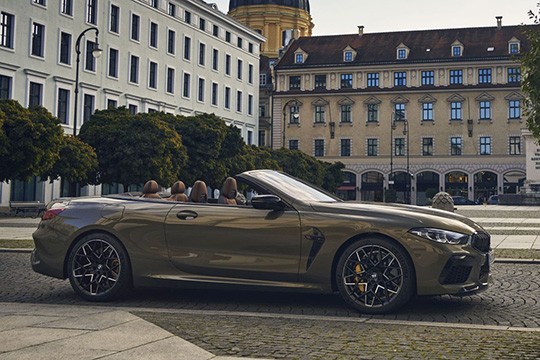