The M3 history started in the '80s with a car built for the street to receive the FIA type approval for the track. The successful E30 M3 was produced only as a two-door vehicle and its successor, the E36 M3, received a four-door version. After that, all of the other M3s were available like that as well as coupe or convertible.

The M3 sedan was easy to differentiate from a standard sedan. In the front, there was a new bumper with a larger grille in the center and two air-dams on the sides. The hood featured a bulge, needed to make room for the bigger engine. From the side, new door mirrors were installed and in the back, four exhaust placed closer to the center were revealed under the bumper.

Inside, the car featured the three colors from the Motorsport GmBH: blue, dark blue, and red, stitched to the upholstery, on the steering wheel and the instrument cluster. The M3 logo was shown as well. The bucket-seats for the front passengers offered a high level of grip in the cornering for its occupants.

But the magic of the M3 was underneath its skin. A 4.0-liter V8 engine in the front sent its power via a 6-speed manual or a 7-speed automatic gearbox (dual-clutch). The car was quicker to 100 kph (62 mph) by 0.2 seconds when equipped with the automatic gearbox. The perfect balance and weight distribution granted a great level of cornering speed. 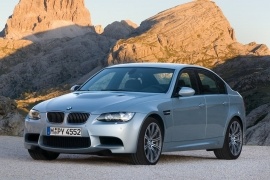