BMW introduced the second generation of the M3 in 1992 as a coupe, and two years later, it unveiled the four-door version for it.

While the E30 M3 was available only as a coupe, the second generation was available with a four-door sedan and a convertible bodywork. Thus, those who needed a four-door vehicle that was fun to drive and sporty had the option to get one from the German automaker.

Unlike its predecessor, the second generation of the M3 was more subtle. It took someone with a keen eye for detail to distinguish an M-version from a regular one. But there were a few details that revealed the differences. For starters, the front bumper was different. Unlike its regular sibling, the M3 sedan featured an apron that sported a rectangular air intake in the middle, flanked on the sides by two small scoops and squared fog lamps. On the profile, the door mirrors were aerodynamically profiled and mounted on the bodywork with two thinner supports instead of a single, wider one. Moreover, the rocker panels were sculptured so they could divert the air from the sides and prevent it from entering under the car. Finally, at the back, the M3 sedan received a diffuser under the bumper and a wing on the trunk.

Inside, the automaker installed a three-spoke steering wheel with a small M-badge on the lower one. All versions got high-bolstered bucket seats at the front with multiple adjustments. As an option, BMW offered leather upholstery. Also standard was a high-fi sound system and an onboard computer. Worth noticing that the red line on the tachometer started at 7,500 rpm.

Under the hood, the car was introduced with a 3.0-liter inline-six engine that developed 286 PS for the European market but just 240 for the U.S. customers. In 1995, the German automaker upgraded the powerplant to a 3.2-liter displacement that led to 321 PS for European customers but the same 240 ponies for the U.S. market. 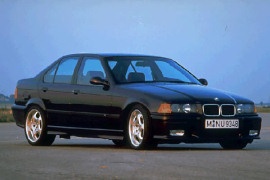