After four generations with M3 in various forms, the fifth-generation of the performance model from BMW was available as a four-door sedan only.

The German car-maker decided to name the coupe versions with even numbers. So, the 3-Series coupe became 4-Series. But that didn't mean to throw away the M3 badges. Those were applied to the four-door BMW 3-Series.

In 2014, BMW announced the sportiest version of the 3-Series, the M3. On the outside, it looked different than the rest of the stable, featuring a new front bumper with a bigger spoiler and wider side-pods as air-intakes. On the front fenders, a set of air-vents enhanced the look of the car, and minimized turbulences in the front wheel arches. Unlike its predecessor, which ad a bulge on the hood due to its massive V8 engine, the M3 had a smaller one more for design purposes and for pedestrian protection. A specific set of 18” light-alloy wheels was installed on the car. In the back, there were four exhausts under the diffuser, which was specifically designed for the M3.

Inside, the M3 showed its family roots in the motorsport arena. High-bolstered seats, special steering wheel, special instrument cluster, and the three-color of the M badge spread around the cabin, on the seats, on the gear-stick, and on the dials.

The 2014 M3, also known as the F80, was the first turbocharged BMW M3. It featured an inline-six unit under the hood. Its 3.0-liter displacement was smaller than the former 4.0-liter V8 of the E92 M3. But it offered more power and more torque than the model it replaced. It was mated as standard to a 6-speed manual and there was an option for a 7-Speed dual-clutch automatic gearbox. 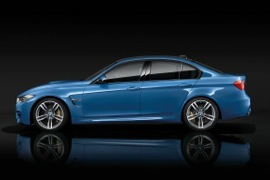