The 2007 BMW M3 was the last naturally aspirated M3 and the first that featured a V8-engine under the hood, apart from the very limited edition of the 2001 BMW M3 GTR.

The fourth generation of the BMW M3 was announced right from the start to be available in three body choices: sedan, coupe and convertible. The later, named E93 on the BMW internal coding, featured a retractable hard-top that added some weight to the car but improved the fun factor.

Unlike the regular 3-Series convertible, the M3 featured a different bumper with big air-intakes. On the hood, the manufacturer had to put a bulge to install the big, tall, V8 engine, which was higher than the inline-six unit on the rest of the 3-Series. The hood featured two air-vents on each side of the bulge, but only one was functional. Another pair of air-vents were on the side of the car, behind the front wheels, to extract the air from the wheel well. At the back of the car, there were four round exhaust and a diffuser between them. The three-piece hard-top could have been retracted in 22 seconds.

Inside, the M3 convertible offered the same space as in any regular 3-Series Convertible. Due to its longer wheelbase than its predecessor, it offered enough legroom for the rear passengers, but only two seats.

Under the hood, there was a 4.0-liter V8 naturally aspirated engine. It was mated to either a 6-speed manual or a 7-speed automated gearbox. The latter had a better 0-100 kph (0-62mph) time due to a faster gear change time. 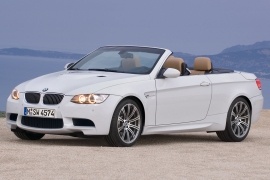