The third generation of the M3 was built in a choice of two body styles: coupe and convertible.

Even though the convertible was heavier, its performances were no joke.

The first generation of the BMW M3 was a race-purpose car built for streets to receive the FIA approval for racing. Its commercial success was so big that the car-maker decided to build offer M3 versions for the following 3-Series vehicles. The 2001 M3 (E46) was the third generation. While the E30 M3 was built in a little over 17.000 units, the E46 M3 convertible alone was sold in almost 30.000 units.

The aggressive look of the car was due to its rounded parking lights, named “Angel Eyes” even though they looked from the opposing team. The big bumper with a lower apron and wide grille was needed to hide the big radiator and various coolers. Two scoops on the hood allowed a part of the hot air to escape from the engine bay. On the sides, a pair of vents on the front fenders resembled, in a modern way, those found on the glorious BMW 507. The car featured a thicker A-pillar to reinforce the bodywork. From there on there was no other visible reinforcement on top of the body.

Inside, the M3 Convertible offered room for four occupants. The front bucket seats were fitted as standard. In the back, there was not too much room for long trips. The soft-top was completely retractable behind the rear bench. The dashboard and the center console were the same as for the coupe version.

Under the hood, the M3 Cabriolet was fitted with the same 3.2-liter S54 engine mated to a standard 6-speed manual. As an option, there was a 6-speed automated gearbox named SMGII, with a single-clutch system. 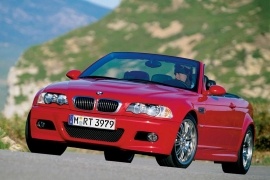