Founded in 1972, the BMW M’s focus was to develop and build race cars.

While all the models produced by 1978 were based on already existing BMW models, the BMW M1 was the first to be built from scratch: the chassis was made at Marchesi and the body work at T.I.R in Italy and were later sent to ItalDesign to assemble the interior.
BMW had to partner with Lamborghini as they could not build the 400 street-legal units in the requested timeframe by themselves. The mechanical parts were mounted in Stuttgart. The M1 had a coupe body style and was also called the E26.

The M1 remained one of BMW’s rarest models and the most successful race car they have ever built. Only 453 units were built. The M1 was sold for only 3 years, from 1978 to 1981.

17 years later, a BMW M1 Hommage Concept was launched, to celebrate the sports car’s 30th anniversary. The concept raised the question if whether BMW would build a modern M1 or not. 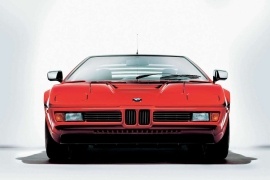