BMW introduced an M version for its nimble little roadster Z3 in 1997 and offered it on both sides of the Atlantic, but with different power levels.

Basically, it was just another Z3 with a more powerful engine. But there was more than that. There were some visual upgrades and technical improvements that made the M-Roadster more desirable than its less-powered siblings.

The exterior benefited from a new front bumper that featured a lower spoiler. In addition, both the front and rear fenders were wider to fit the larger wheels and tires. In addition, the front fenders' louvers got a chromed horizontal slat, resembling the legendary BMW 507 from the late '50s. At the back, the quad exhaust system expressed in a vocal way the sound of the six-cylinder engine.

Inside, the Z3 M-Roadster received more standard features than its less-powered siblings. The leather-wrapped and heated high-seatback bucket and the power-folding roof were offered as standard. In addition, a better sound system and an AC unit were also present.

When it was introduced, the M-Roadster received the 3.2-liter S52 engine carried over from the E36 M3 that produced 321 PS (316 hp) for the European customers, while the American version featured the S50 powerplant that offered just 240 hp (243 PS). Later on, in 2001, the car finally received the improved S54 powerplant that provided similar power on both sides of the Atlantic. All versions were paired with the same five-speed manual, and the power went to the rear via a limited-slip differential. In addition, the M-Roadster got better brakes and stiffened suspension than its siblings. 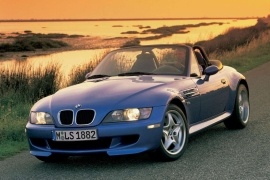