The very first Isetta was introduced to the large public in 1953.

Designed as a short-distance purposed vehicle (or microcar), the Isetta was developed in Italy and assembled in several European countries (from Germany and Spain to France or Great Britain).

Due to its egg-shape body style, this car was nicknamed 'The Bubble Car'. Two years after Iso Isetta's official launch in Turin, BMW designed an Isetta of its own, featuring the same exterior design but different components. It initially came with a 250 cc 4-stroke engine (based on the BMW R25/3 motorcycle) and a revised suspension. A year later, BMW introduced the Isetta Moto Coupe DeLuxe with redesigned windows and improved on-road performance.

A BMW Isetta was used to smuggle people across the East to West Berlin and it's also the vehicle that helped BMW reborn after World War II. In 1955, the BMW Isetta became the world's first mass-production car to achieve a fuel consumption of 3 L/100 km (78 mpg-US).

Later on, a new Isetta 600 version was launched, featuring a longer wheelbase (to accommodate up to 4 people) and a more powerful 582 cc twin engine. This model was discontinued in 1962 and was replaced by the new BMW 700. More than 160,000 units were sold worldwide. 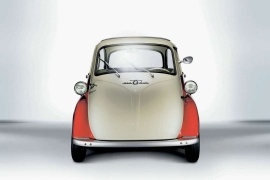