BMW introduced the seventh generation of its flagship model, the 7 Series, shocking the world with its new design but pleasing everyone with the new technologies offered.

After almost half of century since the launch of the 7 Series' first generation, the German carmaker introduced the seventh sequel of this lineup. It came with lots of innovations and, for the first time, a fully electric version aimed against the EQS from its traditional competitor, Mercedes-Benz.

When BMW launched the 2001 model-year 7 Series, it rocked the world with its disruptive design. Most people didn't like it, but it was the best-selling 7 Series until then. Two decades later, the 2022 model year tried to walk into its ancestors' shoes and featured an intriguing design. Its front fascia sported the tallest and widest grille ever mounted on the German brand flagship model. Moreover, the LED daytime running lights were installed very high and looked like eyebrows above the LED headlights buried deep into the upper side of the bumper, flanking the massive grille. Lower, on the apron, the carmaker added another set of grilles and air-intakes. Another shocking detail was the reinterpreted design element, known as the Hofmeister kink, which sported an angular shape at the bottom of the C-pillar.

Inside, the car featured a 12.3" display behind the steering wheel and, in addition, another 14.9" touchscreen for the infotainment system. Both of them were covered under a common glass, giving the impression of a very long, continuous display. The 2022 7 Series also featured a standard Panoramic Sky Lounge LED roof, which consisted of a single, fixed glass surface surrounded by a steel frame, covered by an electrically operated interior sliding shade. The comfort and luxury level of this new Bavarian flagship was enhanced with a plethora of options, including a 31.3" 8K touchscreen display fitted with Amazon Fire TV.

Under the hood, right from the start, the 2022 7 Series offered a choice of three engines. The base version featured a new, Miller-cycle, twin-turbo inline-six aided by a 48-volt mild-hybrid system. Next in line was the 760i version with a 4.4-liter twin-turbo V8, while the most important addition was the i7 xDrive60, the first full-electric 7 Series in history. 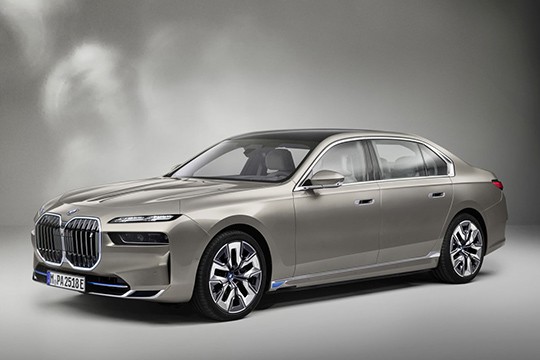