BMW refreshed the seventh generation of the 3 Series in 2022 and, besides the sedan, the station wagon was upgraded as well.

In 1985, BMW introduced a station wagon version for the 3 Series, named Touring. It was a big hit for the German carmaker, especially since there were not too many choices for premium station wagons in the compact segment.

The carmaker revised the car's exterior by introducing new, narrower headlights that were available with adaptive LEDs. Moreover, the car received a few options for the front bumpers, including an option for the M Sport Package and M Sport Package Pro. The latter was newly introduced for the lineup. While the aggressive design was nothing unusual for the sedan, the station wagon usually was not that daring. On the sides, the blacked-out B- and C-pillars tried in vain to resemble a shooting brake. At the back, the available diffuser completed the car's sporty look together with the roof spoiler mounted on top of the tailgate.

Inside, the most significant change was on the dashboard, which featured the BMW Curved Display. In addition, the carmaker installed a 12.3" instrument panel in front of the panel and an additional 14.9" infotainment screen above the center stack. This came with the BMW Operating System 8. As for the trunk space, nothing changed when compared with the 2019 3 Series Touring.

Under the hood, BMW installed a wide choice of engines, ranging between 148 hp (150 PS) and 369 hp (374 PS), with either four or six cylinders fed by gasoline or diesel. Moreover, a plug-in hybrid version was also available. Depending on the engine version and options, the power went to the rear or in all corners via a manual or an automatic transmission. 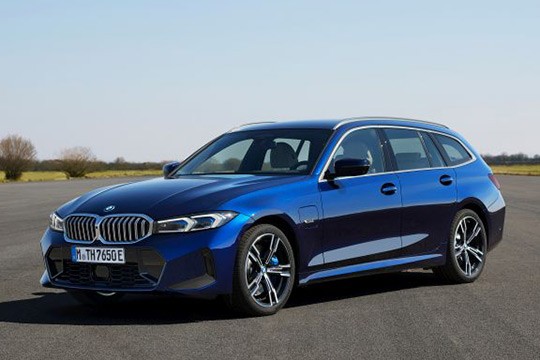