The fourth generation of the BMW 3-Series came on the market in 1998 and rocketed to the top of the sales charts in the premium compact segment.

In 2000, the Mercedes-Benz C-Class overtook it.

As usual, BMW knew that that was going to happen and as soon as it launched the 3-Series, it's engineers started to work on the facelifted version, which was introduced in 2002. It wasn't an easy job to do, but the results exceeded the expectations.

From the outside, there were minor changes to the bodywork. The distinctive new look of the headlights, with a double curved line on the bottom, matched the new bumper. In the back, a new set of taillights was installed. From the sides, there were little differences between the facelift and non-facelift versions.

Inside, a new steering wheel with paddle-shifters was installed for the vehicles equipped with the automated (SMG) transmission. Other than that, most of the base models remained the same, with minor changes to trims. The infotainment unit was upgraded.

The most important change was for the drivetrain, where a new engine lineup was introduced. The base model was a 1.8-liter unit, named 316i, which offered 115 hp. The most popular version was the 318i, which offered a 2.0-liter unit rated at 143 hp. It was the first 2.0-liter with four cylinders installed on a BMW since the first generation. Top of the range version was the 231 hp 3.0-liter unit, which could have been mated to a 6-speed manual, with rear or all-wheel-drive system. All versions were available with an automatic, 5-speed transmission. 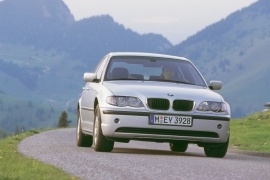 5 An Uber Driver Won a Brand-New BMW M3 Touring and Some Spare Cash, His Son Was Ecstatic