The third generation of the BMW 1-Series was a revolution for the small German car since it was based on a front-wheel-drive platform.

But it didn't mean it was less performant.

The success story of the 1-Series began in 2004. The sporty, nimble, small car gathered attention from everybody. The second generation was launched in 2011 and it continued the big sales numbers that reached 1.8-million units by the time the third generation appeared.

From first sight, it is impossible not to notice the huge kidney-grille. The angled headlights are going upwards along with the front fenders into a more accentuated slope toward the A-pillars. Since the front-wheel-drive platform was with transverse engines, the whole front of the vehicle was shorter than the one on the previous generation. The shorter front of the car allowed a bigger greenhouse with a long roofline that dropped away toward the rear. A wide tail with big shoulders over the rear wheel arches emphasized the car's sporty look.

Inside the cabin, there was more room than in the previous generation, since the engine and transmission were in front of the windshield. Since there was more room for the front seats, those were installed forward and in effect, the rear legroom was bigger. The driver had a TFT display instead of the usual dials in the instrument cluster. A new infotainment unit that features gesture controls were installed.

Under the hood, there was a wide variety of engines, both diesel, and gasoline with manual or automatic transmission. For specific engine versions, an all-wheel-drive system was available. 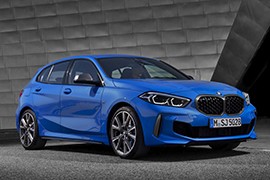