Bentley dared for more and was eager to create a luxury car for the driver, not the passenger, and thus it made the R-Type Continental based on the same chassis as the regular R-Type.

Back in the early fifties, the dawn of a new era began in the automotive industry, offering faster cars for wealthy people, and Bentley owned the scene with the R-Type Continental, which was the fastest four-seat production vehicle in the world. Thus, Walter Owen Bentley's dream was, once again, achieved.

Unlike the regular R-Type, which was designed like a brick with a flat front area similar to the one installed on the Rolls-Royce Silver Dawn, the Continental version featured an aerodynamic bodywork built by H.J. Mulliner with lightweight aluminum. At the front, the V-shaped chromed radiator grille sported the Flying-B at the top and was flanked by the curved, wide fenders. The descending beltline made the car look elongated, and the raked, curved windshield emphasized the car's sportiness. The R-Type was built as a two-door Grand Tourer, with long doors and a second side window behind them, fitted with a pop-out opening system to help ventilate the cabin. At the back, the sloped roof was followed on the same line by the trunk's lid, flanked by slightly taller rear quarter panels. Strangely though, the taillights were very small but protected by a fat chromed bumper.

Inside, the R-Type featured leather-wrapped seats and door cards adorned by wood trims and chromed handles. Also, the dashboard was covered in lacquered wood, while the three-spoke steering wheel fronted the dials. Strangely, the gear stick was on the driver's right side, even for the right-hand drive vehicles, popping up from the car's floor.

Under the hood, the 4.6-liter inline-six engine was enlarged to a 4.9-liter displacement in 1954. 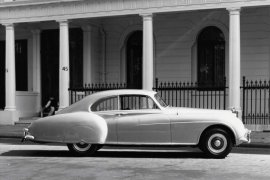