Bentley released the new generation of its luxurious Flying Spur sedan in 2019.

The British carmaker has added a ton of new technology in it, starting from the mild-hybrid 48-volt system and going through the infotainment system. On top of that, the flying B logo raises up from underneath the hood and is illuminated.

Bentley is considered one of the most luxurious driver's cars in the world. Its goal is to make a top luxury vehicle but in supercar area of performance. In order to achieve this, Bentley engineers used the new W12-engine with 6.0-liters of displacement and twin-turbos, which results in 635 hp and 900 Nm (664 lb-ft) of torque. This unit is coupled to an 8-speed dual-clutch gearbox. The result is translated into a sum of great performances: 0-60 mph in 3.7 seconds (0-100 kph in 3.8 seconds) and a top speed of 207 mph (333 kph).

Inside the new Bentley Flying Spur, the customers can choose between 16 colors of leather and wood veneer to match their personality. The modern side of the vehicle can be noticed on the Bentley Rotating Display, which can show either a wooden veneer, a 12.3 touch-screen display or three elegant round analog dials.

On the outside, there are more refinement touches, which will show the value of the Bentley brand and its customers. Diamond-like LED Matrix headlights, a dark front grille and 22” wheels are just a few touches of luxury for the great, 2019 Flying Spur. 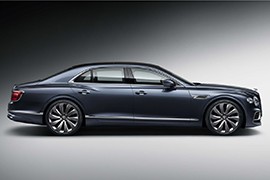