In 2017, Bentley unveiled the fastest four-passenger convertible ever made to that date: the GTC Supersports.

With a long motorsports history to back it up, Bentley focused on high-performance luxury vehicles. Since it was part of the Volkswagen Group, it had access to the latest technologies from Audi and Porsche, other companies that wrote motorsports history books. So it was no surprise for the British brand to try and succeed to offer top luxury and performance vehicles for those who asked for it. On top of that, the carmaker decided to cut the roof and offer the Continental with an open top for relaxed or spirited driving experiences.

Bentley designers reshaped the GTC range and changed the front part of the car to look more aggressive. The black accents on the hood-vents, mesh-grille, side-intakes, and the lower lip spoiler made the car looks like it was made to burn the roads ahead. On the front fenders, the carmaker installed an additional set of black-painted vents. In the rear, a redesigned bumper allowed the slim oval, black pipes to get through the diffuser. The soft top was completely retractable behind the rear seats at the touch of a button.

Inside, Bentley used a unique color split that has been created, using three colors: the first tri-tone interior offered in this generation Continental GT. A new diamond-quilted design was incorporated in the seats and door side panels, while chequered Supersports carbon-fibre fascia panels joined the existing list of ten veneers and technical finishes available. The interior was completed by new Supersports emblem stitching, steering wheel, and gear lever.

Under the hood, Bentley installed the W12 bi-turbo engine, good for 710 hp. It sent the power in all corners via an 8-speed automatic transmission. 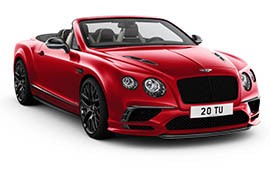