The Bentley Continental GT showed up on the market in 2004 and it had a second generation in 2011.

But it took a trained eye to differentiate the two generations unless they were parked next to each other, especially since they had the same platform. The real transformation was in 2018, when a third-generation showed up. And that was the true change. It took Bentley a lot of time to do it, but the final result is stunning.

The car looks like it was designed by an obsessive-compulsive disorder team with the highest attention to detail. Even the inside of the headlights has a special pattern, like a crystal glass for scotch. In the lower part of the front fenders there is a vent to extract the air from the wheel-well. In the rear, the elliptical taillights are big and red and somehow, Bentley made them legal and bright. An interesting fact is that the reverse light is integrated under the bumper. As expected, all the lights use LED technology.

Inside, there was huge attention given to details from the silver knobs and buttons to the diamond-like stitches on the seats. On top of the center console there is an optional Bentley Rotating Display. It features a 12.3-inch touchscreen housed in a three-sided unit, which revolves the veneer to reveal the touchscreen, as well as three elegant analog dials. 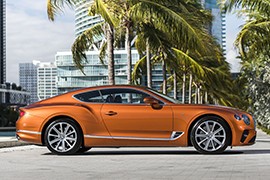