Bentley introduced the fourth version for its SUV Bentayga in 2021, the S-version, which was tuned for spirited on-road driving without giving up its off-road abilities.

The Bentayga shared its platform with the Porsche Cayenne and the Audi Q7, but it was built on a higher quality level and with much more expensive materials. Still, Bentley built it in its carbon-neutral factory from Crewe, in the U.K.

Visually, there were quite a few differences between the regular Bentayga and the S-version. At the front, the carmaker installed smoked headlights and gloss-black lower bumpers. The trapezoidal lower grille at the front and the side scoops were also painted in black. On the sides, the carmaker added S-badges on the front doors. A new set of unique 22” light-alloy wheels enhanced the sporty appearance of the big SUV, while at the back, the lower black edge and the black split oval exhausts completed the aggressive image of the car.

Inside, there was an enhanced interior with new, higher bolsters for the bucket seats and new pads on the door cards. The three-spoke steering wheel sported red stitching and aluminum trim on the lower side. A few S-badges were placed around the cabin, in front of the passenger, and inside the instrument panel.

Under the hood, the carmaker installed a 4.0-liter twin-scroll turbocharged engine paired to an eight-speed automatic gearbox. A new active suspension system reacted faster to provide better cornering abilities, which worked together with the Electronic Stability Control and the Bentley Dynamic Ride system. 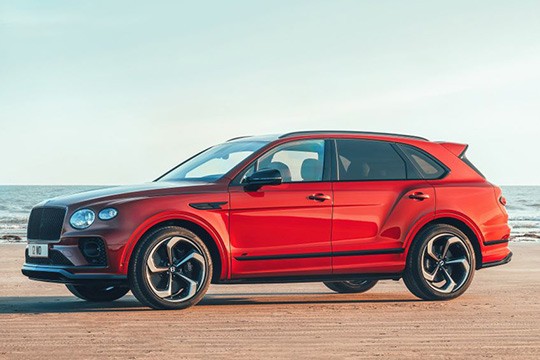 2 Bentley Celebrates Four Decades of Turbocharging, It All Started With Having Fun

3 Bentley Will Drop Its First NFT This September, Here's What We Know About It