Five years after introducing the Bentayga model, Bentley decided that it was a perfect time to change it during the word pandemic situation in 2020.

The first Bentley SUV in history was the Bentayga. When it was unveiled, it featured a mix of luxury, performance, and comfort. After five years and 20.000 units handcrafted at the Crewe factory in the U.K., the model received an update in 2020.

For starters, Bentley offered the Bentayga in two engine choices: the Bentayga and the Bentayga Speed. The regular version featured the new design language introduced by the Continental GT and the Flying Spur. The larger, assertive matrix grille was more upright, while unique, intelligent LED matrix headlamp technology included the signature Bentley design. A more aggressive front bumper emphasized the performance characteristics of the car. The windscreen wipers were fitted with 22 washer jets in each arm, creating a wet-arm. In the back, the Bentayga went through a complete changeover and a new, full-width, tailgate with encapsulated taillights.

The interior offered the same level of luxury as before, but with a new design. The designers made a new dashboard, new door panels, and new seats. The rear seats featured ventilation as an option. A new generation infotainment system was integrated into the dashboard and featured a 10.9" display screen. It was Apple CarPlay compatible and Android Auto on selected markets. The instrument cluster was wholly digital and configurable to suit driver preferences.

Bentley installed the turbocharged 4.0-liter V8 under Bentayga's hood. It was a state-of-the-art engine with direct fuel injection. It was mated to a standard 8-speed automatic transmission, and the power went into all four corners. 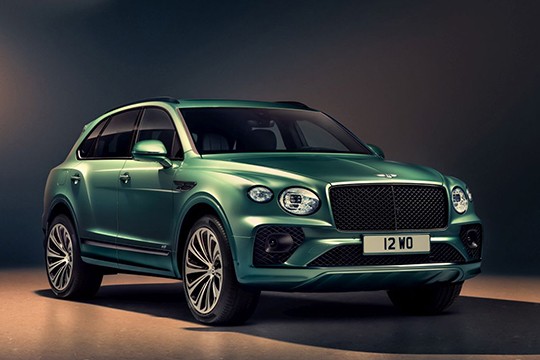