In late 2020, Audi unveiled a new version of its acclaimed compact roadster, the TTS.

Since its introduction in 1998, Audi TT was one of the most praised cars from the German carmaker lineup. Its shapes, initially designed by Peter Schreyer, looked like no other compact coupe on the market. The evolution followed, and in 2020 the car reached its third generation, which was launched in 2014. Despite a world pandemic situation, Audi pushed harder and introduced the Competition Plus for the TTS range.

The German carmaker installed standard LED headlights and a black Audi rings at the front. A black splitter was placed at the bottom of the apron. From its sides, the TTS Roadster Competition Plus showed the standard 20" light-alloy 10-spoke wheels and, behind them, a set of red-painted brake calipers. Its 39 kg (86 lbs) soft top could have been open and closed in 10 seconds at speeds up to 50 kph (31 mph). In the rear, a fixed-wing on the trunk amplified the car's sportiness. Under the car, separated by a glossy black diffuser, the carmaker placed the four oval exhausts.

Inside, the driver stood in front of a 12.3 virtual cockpit that replaced the analog dials as a standard feature of the car. The Nappa leather with red or blue contrast stitching enhanced the interior's look. The attention to detail was great, and the designers decided to add a stitched 12 o'clock marker red or gray on the flat-bottom steering wheel.

The TTS Roadster Competition Plus featured magnetic ride control for the suspension and a Quattro all-wheel-drive system. Power came from the 2.0-liter TFSI engine pushed to provide 320 hp via a 7-speed S-Tronic gearbox (dual-clutch). 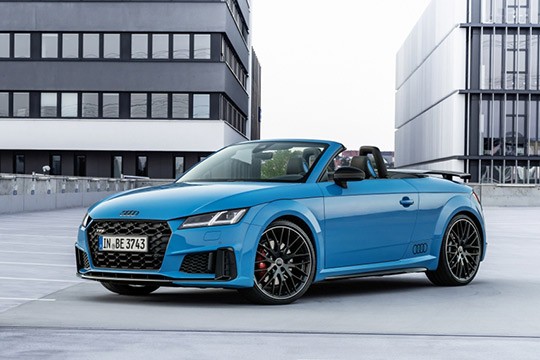