In 1995, at the Frankfurt Motor Show, Audi showed the concept of a future coupe with two seats, an all-wheel-drive and a bold look.

The concept-car was very well received by the market and Audi decided to make it a series model.

Three years after the concept-car was revealed, the series Audi TT was launched on the market. This time, the world was shocked since the series version looked almost the same as the concept car. The car was based on a shortened platform of the Audi A3/VW Golf V. Its rounded forms, with a short cabin and sloped back was very well received by the market. It even had seats in the back, which could have been folded to expand the small trunk.

Inside, the instrument cluster was exactly the same as the concept vehicle. There were two bigger analog dials and two smaller ones, for speedometer, tachometer, fuel level, and engine temperature. Between the two big dials, there was the screen for the on-board computer. The bucket seats were meant to keep its occupants in place, while hard-cornering. And the car had a good appetite for corners. As for the rear seats, the manufacturer placed a stick memo just a reminder that passengers under 1.65m tall are allowed.

At the launch, the TT had one engine option with two power outputs: a 1.8-liter engine with 5 valves per cylinder that offer 180 hp and 225 hp, respectively. The latter was available only with the all-wheel-drive system. In 2003, a VR6, 3.2-liter engine was added. 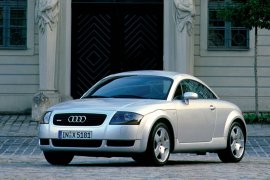 1 High Mileage Audi A4 Cabriolet May Play Games With Your Wallet, It Might Also Be Awesome