After two years since the unveiling of the Q4 and Q4 Sportback concept cars, Audi unveiled the production versions of its new all-electric compact SUV.

While the regular Q4 was a classic-shaped SUV, the Sportback version was designed for the SUV-coupe segment. Audi addressed the car more for those searching for a different mix—a vehicle big enough for a family, with a sporty look, and low running costs. The Q4 e-tron Sportback had them all and something more.

With its 86 cm (33.9") long front overhang, the Q4 e-tron Sportback changed the way an SUV was built. The designers could make that happened since there was no need for thick and big radiators. Its front fascia featured LED or Matrix-LED headlights, depending on the options. With its sloped tailgate, the Q4 Sportback offered an incredibly low aerodynamic coefficient of just 0.26. Its sculptured side panels and big wheels increased the car's aggressive look.

Inside, the carmaker made a bold move and created a unique design for the Q4, with the center stack and the infotainment screen tilted toward the driver. There were no analog dials anywhere. In the instrument cluster, Audi introduced the Virtual Cockpit, used for several years on other products. To show its commitment toward sustainable production, Audi built the front seats with recycled materials. It used about 26 1.5-liter PET bottles for each seat. In the back, the carmaker installed a 40/20/40 split-folding bench, which could increase the trunk size from 535 liters (18.9 cu-ft) to 1,460 liters (51.6 cu-ft).
A
Audi offered the Q4 e-tron with two battery variants and three drivetrains. For the base level, the carmaker provided a rear-wheel-drive Q35 version with a 55 kWh battery pack and the 82 kWh battery pack for the Q40 and Q50 all-wheel-drive, respectively. The rear-wheel-drive Q40 offered the highest range of up to 520 km (323.1 miles). 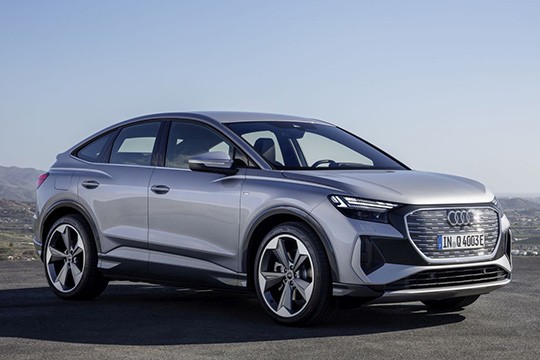