Apart from the luxurious limousine, Audi provided also an S-treatment for its flagship sedan model.

The carmaker aimed it directly at the Mercedes-AMG S-Class.

Unlike its main competitor, the S8 was available either with a standard or a long wheelbase. That made it a mix of performance and luxury. And it showed both in every detail.

When Audi refreshed the fourth generation of the A8 in 2021, it didn't abandon the S8 model. The 2021 version sported a piano-black front fascia with a fish-net-like grille. It was a bold move in times when everyone else used hexagonal, honeycomb-style elements. Also, it used the same shiny dark areas for the side scoops and the lower part of the front bumper. In addition, the car's designers added carbon-fiber-looking caps for the rearview mirrors, enhancing the sporty image. A discreet lip-spoiler adorned the trunk lid at the back, while on the lower side, the four oval exhausts sported a chromed finish flanking the center diffuser.

While the regular A8 was focused more on the rear-seat passengers, the S8 was centered around the driver's needs. Sure, the seats were also comfortable, but their higher bolstering areas provided more lateral support. Like its non-S sibling, the car featured digital displays on the center stack and a TFT Audi Virtual Cockpit for the instrument panel. The latter could be configured according to the driver's needs and preferences.

Under the hood, Audi installed a twin-turbo V8 helped by an ISG (integrated starter-generator) to reduce the turbo-lag. Moreover, its standard all-wheel-drive and adaptive suspension helped the vehicle during hard acceleration and on high-speed cornering. 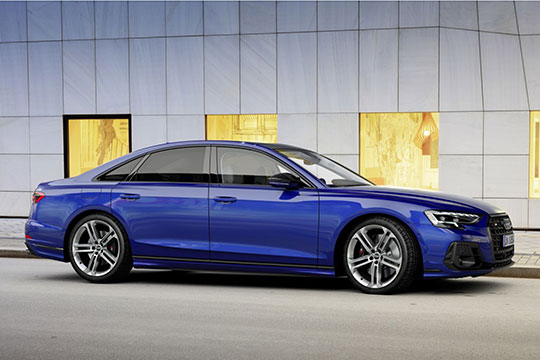