In late 2016, Audi introduced the S5 Coupe and Cabriolet on the market, and by 2020 it was time to be refreshed and pass a new set of emission regulations.

While its coupe brother was the main attraction for petrolheads who were captured by the car's performances, the convertible version was more of an open-top grand tourer. But despite its rag-top, it wasn't exactly the comfortable vehicle that a GT vehicle should be. Due to its stiffened suspension compared to the rest of the A5 convertible versions, it was more rigid, but it also featured more luxurious items.

The S5 came equipped with full-LED headlights fitted as standard and a new, single-frame grille design for the facelifted version. It resembled the honeycomb grille from the mighty Audi Sport Quattro from 1984. Unlike its famous ancestor, the 2020 model didn't feature four rectangular headlamps, but only two wider ones. They were available with Matrix-LED or laser to enhance the view on the road. Its canvas-roof was completely retractable at the touch of a button and could disappear in under 18 seconds while driving it at speeds of up to 31 mph (50 kph).

Audi enhanced the S5's cabin with a new MIB3 unit. The infotainment system featured a large, 10.1" touch-screen display. The German carmaker claimed that the new unit's reaction time was ten times faster than the outgoing MIB2 device, which was already known for its responsiveness. The system allowed voice commands.

The 2020 S5 Cabriolet was fitted with a 3.0-liter V6 TFSI unit. Due to the turbocharged direct fuel-injection system, the engine offered 349 hp. It was mated to an eight-speed Tiptronic gearbox and sent the power in all four corners. 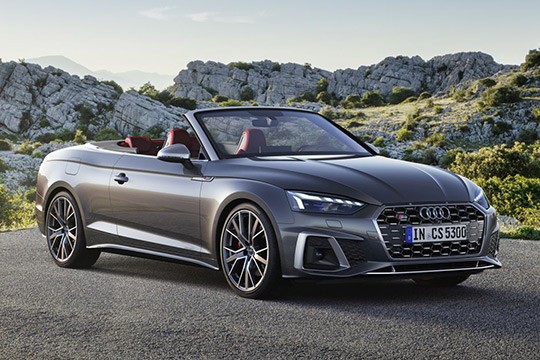